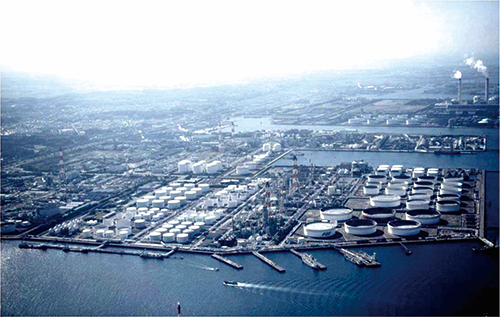 Fuji Oil's Sodegaura Refinery introduced TPM in the year 2000 and is now pushing its TPM Level III programme forward under the vision of becoming 'one of Japan's top 5 oil refineries, with originality, independence and a high level of international competitiveness'.
Although this state of affairs is amply demonstrated by the richness of the plant's activity boards, what is particularly outstanding is the large number of visualisation ideas in use. At times severe, at times gentle, the refinery's passion for continuous improvement is obvious. 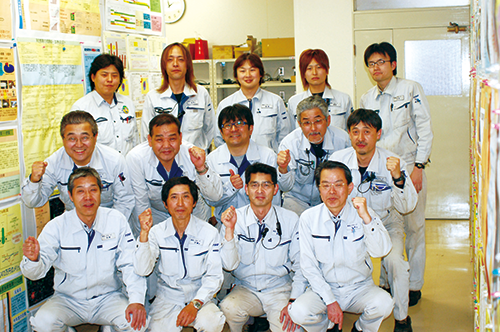 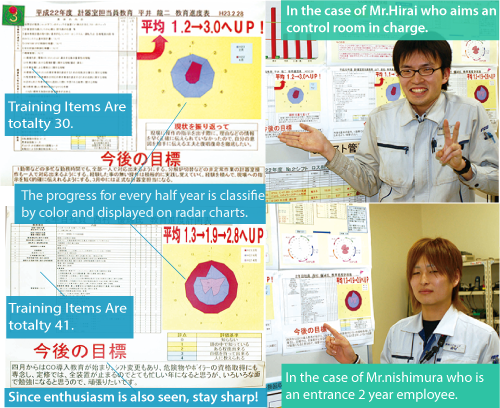 The progress of the various trainings is shown on the activity board and is updated at six-monthly intervals. Does this put the team under pressure? No, it spurs them on. 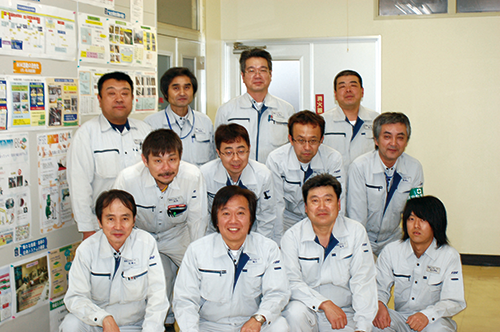 The No.3 Production Group's second-shift team shown in this photograph is responsible for managing the plant's boilers and other utilities and bringing the products in and out. Because they work so often with subcontractors, their safety programme focuses on sharing safety information including near-miss locations. The team members are (front row, from left) Isamu Sato, Shift Leader Masayoshi Horie, Michiyoshi Takano, and Shota Sakuma; (middle row, from left) Takashi Takeda, Takeshi Yamaguchi, Shunsuke Tsunoda and Section Manager Toshiaki Takahashi; and (back row, from left) Hitoshi Ejiri, Manager Eiji Takahashi, Takeshi Ota, and Koichi Suzuki.

A news bulletin specialising in near-misses is also published four times a year with the aim of sharing information with subcontractors. Loaded with illustrations and photographs, it is very clearly laid out and easy to understand.

Near-miss locations are marked out to draw people's attention. 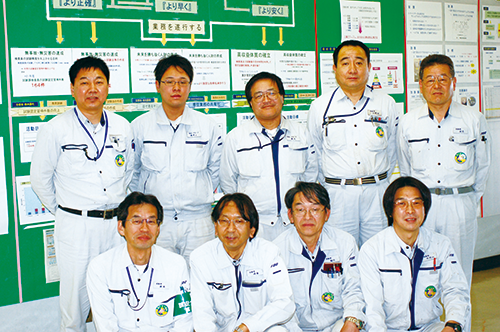 This photo shows the Testing Section team, which carries out tests on the refinery's products. They are striving to improve the work manuals in order to help the many temporary staff ('partners') who work in this department. In the photograph are (front row, from left) Section Manager Kazumi Suzuki, Masami Isobe, Hisashi Horikawa, and Toshihito Nakamura; and (back row, from left) Wataru Sasaoka, Tatsuhiko Suzuki, Yasuaki Okuyama, Shigeyoshi Onoda and Tadashi Iwamoto. 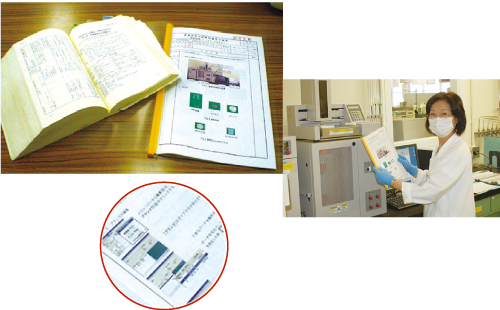 The team is creating a 'manual that needs no words' for each task, using plenty of photographs of the work, and has so far completed 68 of the 83 required.
The work manuals used to be thick books, full of words but no illustrations...

The manuals even contain computer screenshots, and everyone praises them as being very easy to use. 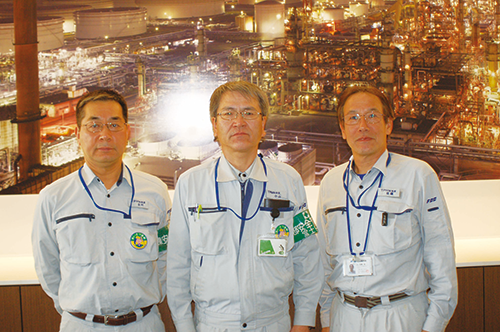 Section Manager Masayuki Furukawa (left), Office Manager Toshio Oyama (centre), and Role Manager Yoshi Sato (right) of the TPM Office are the ones who wield the conductor's baton for the TPM programme. Incidentally, Mr Oyama was honoured with a TPM Senryu* Prize this year with the lines ('I thought too hard / about developing people/now I've too many children'). (*A 'senryu' is a humorous or ironical haiku poem.)

(A device for testing the smoke point of paraffin) 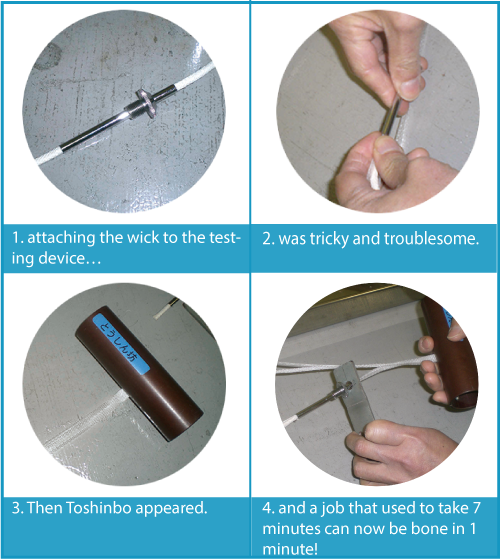 The Testing Section came up with an amazing 'karakuri' (ingenious contrivance)! They made it from string and scrap wood, and called it 'Toshinbo' ('Wick Boy'). Its development cost was zero!. Each idea on its own may be nothing spectacular, but all these little ideas together support a huge refinery as big as 25 Tokyo Domes.

by over 100 TPM Consultants with average of 20 years TPM experience, and covering over 40 countries.